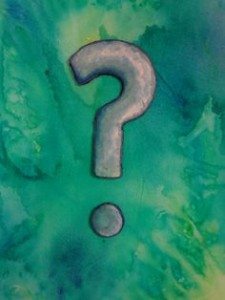 ‘If the answer is self-starvation, the question must be a pretty huge and complex one.’ This is something I heard from a lady who works in eating disorders, and has recovered from anorexia herself. It struck me.

What is the question?

And why do we think this may be the answer?

What problem is there that starvation can be deemed to be a viable solution to?

Throughout history the question as to what the meaning of life has been one pondered by philosophers, artists, psychologists, sociologists – and pretty much everyone in the world. There’s a general acceptance that the primary drive in a human life is one’s search for meaning and purpose.

Carl Rogers, psychologist says in his book ‘On Becoming A Person’: ‘I have however come to believe that in spite of his bewildering horizontal multiplicity, and the layer upon layer of vertical complexity, there is perhaps only one problem…. Below the level of the problem situation about which the individual is complaining—behind the trouble with studies, or wife, or employer, or with his own uncontrollable and bizarre behavior, or with his frightening feelings, lies one central search. It seems to me that at bottom each person is asking, Who am I really? How can I get in touch with this real self, underlying all my surface behavior? How can I become myself?’

I think this question – who am I? – is one that those suffering from an eating disorder are grappling with. Unsure of how to evaluate the world around them and navigate the demands placed either externally or internally, recourse to disordered eating occurs, although not as a result of a rational and linear thought process.

Whether eating disorder behaviors are referred to as ‘coping mechanisms’ or ‘adaptive functions’ there are some roles that the illness serves, including a sense of control, a barrier to rejection, a form of self harm, a need for rules, to diminish painful emotions, and security.

Decoding what the question is is different to studying life to find out the cause. The latter can result in years of rumination, a focus on the past, and sometimes feelings of inadequacy and self-criticism for not having ‘good enough’ reasons to have an eating disorder. A more productive and proactive approach to take is that of seeking what the function of the disorder may be. Almost anyone with an eating disorder knows that starvation is not the answer. Scientific evidence shows that being malnourished, tired, inattentive, cold and breaking is not the way to create the best conditions for happiness.

But if an eating disorder doesn’t provide happiness, what does? Where will meaning be found?

That is why there is such fear of letting go of an eating disorder. The identity building has been on hold, and releasing the illness means becoming you who are and have the potential to be. It’s scary, but thrilling at the same time.

Having been part of your life, your eating disorder is always going to be part of your story. But that does not mean it is part of you. Mental illness of any kind need not define you. Whoever you are, the answer does not lie in decreasing numbers, counting calories, rigid rules and self hatred.

Who am I? I am not my eating disorder.