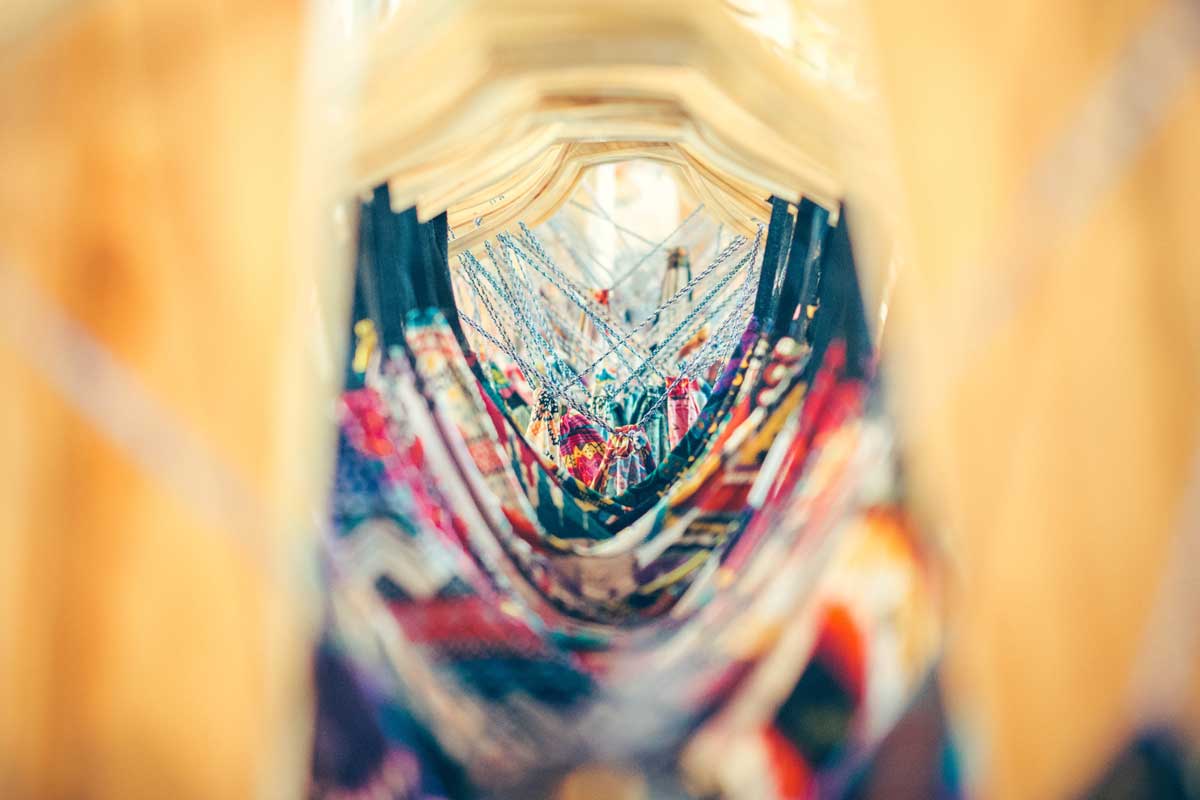 I’ve had many epiphanies in dressing rooms. Before my eating disorder, I looked at my body in the harsh light and realized that it was changing. In middle school, I stood in front of the floor-length mirror and saw how sick I really was. And on December 27, 2018, as a college freshman growing in my recovery, I stood in another dressing room. In that box, I realized that once again, the universe had done me a favor by not giving me what I thought I wanted: skinny jeans.

Several hours before that moment, I’d been wandering around the mall. Sifting through after-Christmas sales, I searched for a pair of skinny jeans not labeled “stretch” or “toning.”

I was trying to replace the two pairs of jeans that I’d had since sophomore year of high school. They still technically fit my healthy body, but the signs of wear on them gave me the urge to replace them.

At first, I was frustrated. Why couldn’t companies just make regular denim skinny jeans? Was it really that hard? I seriously couldn’t be the only person on the planet who didn’t like polyester infused denim!

Eventually, I found a few pairs of pants that weren’t skinny jeans, but I wanted to try on anyway. As I stood in a dressing room I had the epiphany that shocked me into laughter:

I was astonished that I had never considered the possibility before. Why had I been so adamant to replace something that I didn’t truly want or enjoy?

But then, I looked at the times since I had embraced full recovery over a year ago, and things started making sense.

In treatment, a part of me (my eating disorder) breathed a sigh of relief that they still fit. On bad body image days, they had called out as reminders that, while I may not have been able to see it with my eyes at the moment, my body hadn’t actually changed (beyond the natural day to day fluctuation).

On days when I still feel the urge to “look skinny,” I have turned to them over baggy clothing as part of a twisted logic of optical illusion.

Then, I considered what I had felt when I wore them, despite them being the proper size for my healthy body. I had felt frustrated that I couldn’t sit cross-legged in chairs comfortably out of fear that I would split them. I had been in pain as they dug into my stomach, cutting off circulation. Nothing even fit in the pockets and I had to keep pulling at them as they slide down each time I defied them and sat cross-legged.

What do I really want?

Even on the days where I thought I was wearing them because I wanted to, I realized my eating disorder was always able to slide in qualifications:

Me: Man, I look good today!

My eating disorder: because you are wearing SKINNY jeans!

It made so much sense.

When I wore those pairs of skinny jeans, I was engaging in a form of restriction. I was giving into my eating disorder even though I no longer believed it when urges to restrict food popped into my mind.

When I caved to the idea that putting those pants on would ease my anxiety, I was bending to the eating disorder instead of addressing whatever was actually stressing me out.

Then I considered the other two pairs of pants in my pant-rotation. When I wear them, the qualifications are much different and all mine:

In those pants, I can sit any which way I choose. I can stuff the gloriously deep pockets with all the practical and eclectic paraphernalia that I could ever need. In those pants, I can enjoy the present moment because I’m not paying attention to how tight my pants are. My clothes work with me, not against me.

In my recovery, I have seen myself grow in the moments where I have to consider the possibility of not getting what I (think) I want or need.

By this, I mean not getting the early discharge from partial hospitalization I wanted. Or having an inbox full of emails from therapists saying that they didn’t have room for another client. And going to restaurants that don’t end up having what I planned to order. These were all things I thought I didn’t want, but they ended up being what I needed.

This time, not being able to find skinny jeans without polyester was once again not what I thought I wanted – but was what I needed.

At the end of the day, it wasn’t just about the pants (just like intense food restriction in the depths of my eating disorder was never really about the food I was restricting).

It was, once again about the process of using what first felt like an inconvenience to dig deeper into why I felt inconvenienced. It reminded me to continue to question things in my life. Because eating disorders can use many tiny things and habits to distract you from what you truly need and want.

So warrior, look past the things that don’t go your way today. What you think you want may not go your way, but it may be exactly what you need.

Written By
Shauna Savala
More from Shauna Savala
We’re not going to wait to celebrate you until you’re dead! –...
Read More