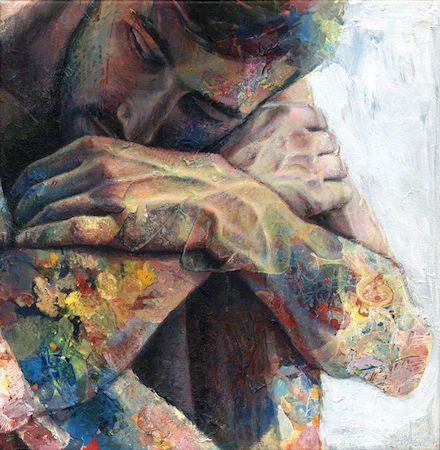 Joseph called the New York Center for Eating Disorders in some distress, “I think I have an eating disorder and would like to make an appointment. I bet I’m the first man who’s ever called you for an eating problem.”

“Actually,” I responded, “many men have eating problems. They’re just not as brave as you to pick up the phone and get some help!”

Joseph expresses a common misconception – that eating disorders are problems of girls and women, not men. In truth, more women than men do have anorexia, bulimia, or binge eating disorders, but men are not exempt from these struggles.

Between 10% – 15% of people with eating disorders are male, but this figure may be low since many men often suffer in silence and feel too ashamed to come for therapy.

Men with eating disorders are under-represented

Men may also be under-represented in the statistics of eating disorders because they can hide their eating problems better than women. An overweight man is less an object of ridicule than an overweight woman. Our society is more tolerant and forgiving of extra pounds on men while women are held to a stricter standard. Also, men who are obsessed with working out and building muscle may be admired as strong, masculine guys, and this may camouflage that they are suffering body image anxiety or an eating disorder.

During his therapy consultation, Joseph, a 21-year-old young man spoke of his girlfriend who had recently left him for another guy. He was depressed and felt quite rejected. Joseph decided if he were thinner and more handsome she would have stayed with him. He embarked on a strict dieting regime to make himself feel more attractive. But his under eating backfired, and he found himself bingeing and making himself throw up. Joseph revealed he’d always felt clumsy as a boy. Always the last to be picked for team sports, he felt inadequate compared to his older brother whom he considered more macho than himself. Joseph’s story highlights some particular dynamics of male eating disorders. These include low self-esteem and worries about one’s masculinity, unfavorably comparing oneself with other men, and feeling inadequate in male pursuits such as sports.

Our media is replete with images depicting what a real man should look like. Where advertising once focused exclusively on skinny and sexy female models, now “buff” male models in tight underwear with “buns of steel” and “six-pack abs” are featured on billboards and magazines everywhere. Sports figures and handsome actors dominate the male imagination. Now, men compare themselves with the muscular, often steroid-enhanced bodies of unattainably perfect male bodies and athletes and struggle with similar insecurities as women.

Men are so driven to look muscular with bulging chests and slender waists, that liposuction to remove “love handles” is popular. Some men even seek saline implants to enhance their chests’ pectoral muscles and also have six saline packets inserted to define the “six-pack” ripped abdomen muscles. Herb supplements to help men get “cut” and even steroid drug use is more frequent. In other words, male body image dissatisfaction has become rampant.

Distortion in Men with Eating Disorders

A new diagnostic category exists called, “male body dysmorphia.” It describes that even a man who may be well built but suffers from feelings of being puny and too small. No matter how much he works out, his feelings of body inadequacy still persist. This psychological distortion is the opposite of anorexia, in which the girl feels too fat despite being quite thin.

The male with body dysmorphia views himself as inferior despite being muscular while the anorexic girl feels too large despite being emaciated.

2       They participate in a sport that requires thinness – runners, jockeys, body builders.

3       They have a job or profession that requires thinness – athletes, male models, actors.

4       Some men with eating disorders have issues around sexuality.

5       Some men with eating disorders have a history of physical or sexual abuse.

Dave was a successful business man with a family of five young children. Although he had been athletic as a younger man, the demands of his business, traveling for work, and supporting his family eroded his opportunity to exercise. Dave described coming home from work and raiding the refrigerator before and after dinner. No matter how much food his wife, Dina, prepared, Dave wasn’t content unless he was stuffing himself throughout the evening. He was gaining weight, and his wife urged him to get help.

In therapy, we identified overeating was Dave’s way to de-stress, to shift gears after an intense work day. Overeating was his way to reward himself for his grueling schedule. But it was beginning to take its toll on his appearance and mental health. Dave initially felt selfish for admitting he needed some private time for himself, given that Dina took care of the house and children all day. But, much to his surprise, Dina supported his efforts to break the binge cycle, encouraging him to join a gym and work out with a trainer. We also explored why Dave always put himself at the bottom of the list of people to be taken care of. We discovered this was related to having to support his family of origin from an early age because of his father’s ill health. He learned to ignore his own needs. Recognizing this pattern was illuminating to help Dave change this behavior with his present day family.

The first medical report of a man with an eating disorder was recorded in the year 1694 by a London physician, Dr. Richard Morton. He described a male anorexic patient as suffering from “Nervous Consumption” caused by “Sadness and Anxious Cares.” He prescribed the following treatment: “a resting cure of horseback riding and abstention from studies.” Contemporary treatment approaches don’t much subscribe to horseback riding or allowing someone to neglect their school work or job in order to get better!

Eating disorder therapy for men, as well as for women, involves creating a comprehensive treatment plan based on the unique needs of each person. This includes a blend of psychotherapy to resolve emotional stress plus behavioral strategies to change unwanted eating patterns.

Men with eating problems can be helped; sometimes it takes a little extra courage to reach out for that help.

*(All names have been changed for confidentiality).