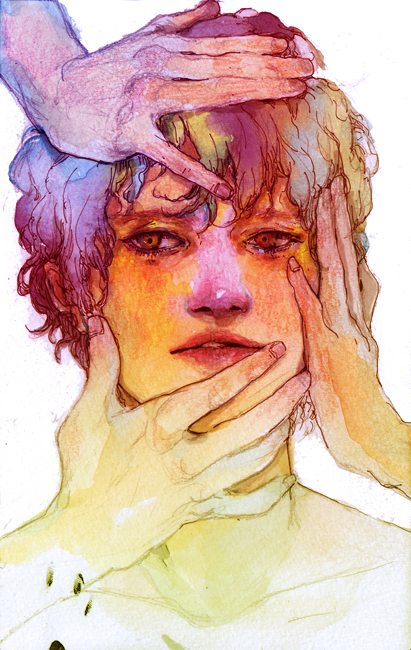 The point is I’ve always been the black sheep in my family. Or the odd man out. The child who marched to the beat of her own drummer. Whatever you want to call it, I was it. This was, of course, all by design.

In a dysfunctional family, they call this person the scapegoat – the one made to bear the blame for others or to suffer in their place. It is the assigned role to one person who is considered a troublemaker, or the defiant and withdrawn family member.

Around 8 years old, I remember lying in bed late one night and overhearing my mom tell my soon-to-be step-dad that I was “special.” As if it were a weird kind of special. It was said in a tone that wasn’t complimentary, more like, “Please forgive my daughter, she’s special.”

Excuse me, but it wasn’t so special that she was marrying a stranger we barely knew and expected us to call this new man “Dad.” But, hey, I guess that was just me being a difficult child.

Separating me or labeling me as different from the rest of the family was a tactic taken early on. I didn’t realize it as a youngster, but now I see that ‘black sheep’ or ‘odd man,” (or ‘special’ or ‘different’) are basically other terms to mean family scapegoat. The person blamed when something goes wrong. Within families, this person takes the heat or is held responsible for problems.

Everyone has a role to play in families, and there are many different family dynamic theories out there. I was the most sensitive and vulnerable, and I worried a lot. This made me an easy choice for scapegoat.

But on the stage of life, we don’t have to dwell in scapegoat-land for eternity. We can step away from the role of family scapegoat.

Here are some things to remember if you really want to quit being the scapegoat:

You are not evil

Just because you call situations as you see them or have someone else’s number, so to speak, doesn’t mean you are bad.

Scapegoats are often told they are difficult or bad and that they rock the boat to cause trouble. It isn’t true.

I wasn’t bad for questioning why I had to call a stranger “Dad” or why my mom would get married so soon after leaving my dad. Who she lovingly called our “sperm donor.” And I wasn’t bad for having failed marriages, even though my other family members have successful marriages. Also I wasn’t bad for performing poorly in school because of a crappy home environment. My advice: shed the guilt and resentment – it won’t serve you. In fact, for the sake of your own mental and physical health, let go of the grudges. Life is short.

You’ve spent a lot of time building your identity around being considered a bad or ‘mouthy kid.’ That negative image you’ve created takes a toll on your self-esteem. And it makes you feel insecure, unsafe and unlovable.

It’s hard to maintain healthy relationships if you think that poorly of yourself.

I’ve experienced this in many circumstances. I’m aware of it now and try to work on negative self-talk. Be kind to yourself.

No one has to ‘get’ where you’re coming from. You could explain it until you’re blue in the face. Your peace of mind can’t come from validation from others or self-righteousness about what you’ve been through.

You weren’t responsible for being scapegoated, so you don’t need to be that label anymore if you don’t want to. Slowly uncover your true self.

One of the things I asked my mom before she died was, ‘Do you have any regrets in life?’ I’m not sure what I expected her to say. She probably felt like I was baiting her. Maybe I was, thinking she’d come clean about her misdeeds. Her reply was simply ‘no’. But then she changed her mind to say: ‘The only regret I have is you and your sister did not make me a grandmother.’ Classic. I can laugh about that comment now. It doesn’t matter that she didn’t ‘get it.’

Scapegoats tend to see things as black and white, right or wrong. At least I do. I’m not going to force forgiveness if I haven’t properly grieved. However, I try to have compassion for my parents. Their own life circumstances made them emotionally checked out and neglectful.

They were financially in trouble and tried to hide it. But it became obvious with every bounced check that things weren’t quite as they appeared. It’s a process to heal. But hopefully, love, empathy, and forgiveness will take away some of the pain.

Stop being an idealist

No one is perfect. Humans are flawed. Have patience. Not everyone is going to live up to some clear cut or rigid standard you’ve created. Work on building healthy relationships with others, connect with them and accept them…flaws and all.

Remember: The term scapegoat comes from an interpretation of scripture. In Leviticus, the ritual begins with two goats, one was the chosen or sacrificed goat, and the other one was cast into the desert to carry the sins of others. The scapegoat is the one who got away.