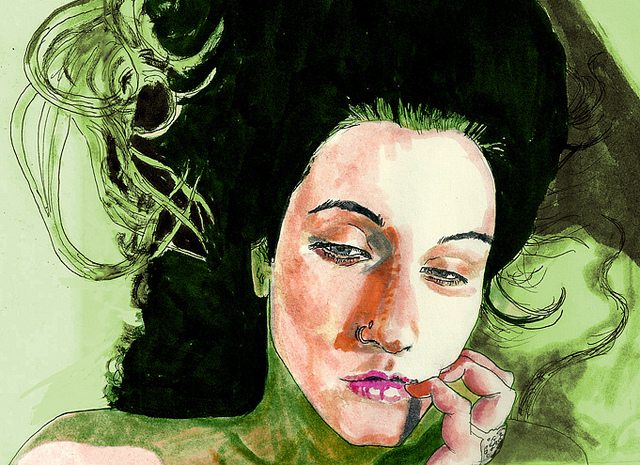 I used to need to feel hungry in order to feel safe. I believed that any “unnecessary” fat on my body (read: fat that could, through whatever means, be starved off or turned to muscle) signified weakness. If I had fat, I thought it meant that I was out of control. That I had allowed myself more than I needed, more than I deserved. I only felt safe from the threat of loss of control when I was hungry. The sharp sensation of hunger was my evidence that I would not be ruled by my desires. The emptiness in my stomach temporarily silenced my worries of eating too much. Hunger was my repentance. My assurance that I was strong, that I was in control.

My nutritionist told me that if I listened to my body and ate when I was hungry until I was full, that my body would reach its optimal weight naturally. She said that everyone’s body is different and that I shouldn’t impose my mind’s idea of how my body should be upon my actual body. She said that my mind has no idea how to guide my body to its optimal health. I believed her, but I didn’t trust myself. If I ate until I was full, then I would have no evidence of my strength or worth. My hunger pains and emaciated body—my security blanket—would be gone. I would have no way of verifying whether or not I could control myself.

I believed that I needed to beat back the pains of my hunger, or else it would rule me.

I believed that if I gave the desiring part of myself an inch, it would take a mile.

First, I thought, I would be allowing myself to eat until I was full, then I would be eating half a pan of brownies as a snack, then I would be getting black-out drunk every night, sleeping around and living recklessly and harmfully. I felt that if I released some control, the floodgates would open, and an insatiable, slovenly beast would emerge from within me. I would go on an unchecked rampage of consumption. I truly feared my unleashed self.

It took years of compulsive control for me to realize why I was so scared of my desires. I fundamentally believed that I was not allowed to have what I really wanted until I proved that I was “worthy” enough. So I would rather numb my desires than feel them because not feeling anything was easier than wanting the fulfillment that I couldn’t have. I thought it was better to numb feeling totally than to take the risk of allowing feelings to be there that I might not know how to deal with.

I realized that the hunger I suppressed was so much greater than my hunger for food. I dieted in order to suppress my cravings for nurturing, the allowance of emotion, sacredness, pleasure, intimacy, connection, vulnerability, and self-expression. I felt that I was wrong to want these things.

I only allowed myself to want what I thought I should want: to be productive, high-achieving, disciplined and well-known.

So I broke myself up into two parts: that which achieves and that which desires. The desiring part of myself was the part that had been hurt in the past–when I felt rejected, when I wanted love and couldn’t get it, when I felt ashamed or betrayed. So I thought it was better to numb this part of myself than allowing myself to get hurt again. I was battling against myself: the achieving part trying to conquer the desiring part. The desirer threatened my ability to achieve and thereby prove my worth, so I rejected this part of myself.

We all have a rejected self: a part of us that we do not permit to be allowed and expressed. My eating disorder was really just me trying my best to hide the parts of me that I had rejected. I feared that my feelings might expose my rejected self, so I went to great lengths to repress and numb them. In her book Eastern Body, Western Mind, Anodea Judith explains that when we reject a part of ourselves, we “deny an essential part of our wholeness”. Since a part of ourselves is not actually divisible from the whole, we are forced to numb our whole selves.

Judith explains that when our true cravings are numbed, “secondary pleasures take over, such as the pleasure of drinking, drugs, avoiding responsibility, sexually acting out, or over/[under]eating.” Numbing behavior can even take the form of perfectionism or workaholism. But these numbing tactics can never truly satisfy our longing for wholeness, and always leave us craving more. It’s like drinking salt water to quench our thirst. It only leaves us thirstier. We can never be thin enough, perfect enough, rich enough, accomplished enough, drunk enough, high enough, full enough.

The only true antidote to numbing behavior is to embrace the rejected parts of ourselves.

Indeed, this is the intention of many contemplative practices. Yoga means to yoke or to unite, religion (re-ligion like ligament) means to bring back together. We meditate in order to bear witness to the whole experience of ourselves without resistance or judgment. Each of these paths are meant to lead us back to our whole selves. As Psychiatrist and author, Theodore Isaac Rubin stated,

“I must learn to love the fool in me–the one who feels too much, talks too much, takes too many chances, wins sometimes and loses often, lacks self-control, loves and hates, hurts and gets hurt, promises and breaks promises, laughs, and cries. It alone protects me against that utterly self-controlled, masterful tyrant whom I also harbor and who would rob me of my human aliveness, humility, and dignity but for my Fool.”

I realized that the answer is never to numb, by whatever means, the part of ourselves that we keep in shadow. Indeed, as Judith stated, “keeping the shadow in chains requires a great deal of energy and robs the whole of its grace and power”.

I thought that if I allowed the rejected parts of myself to be expressed, that I would lose myself. What I discovered was that only through facing and eventually embracing these parts of myself did I truly find myself.

The answer is never to conquer our hunger; it is to embrace and honor that for which we truly hunger: to be seen for all that we are.