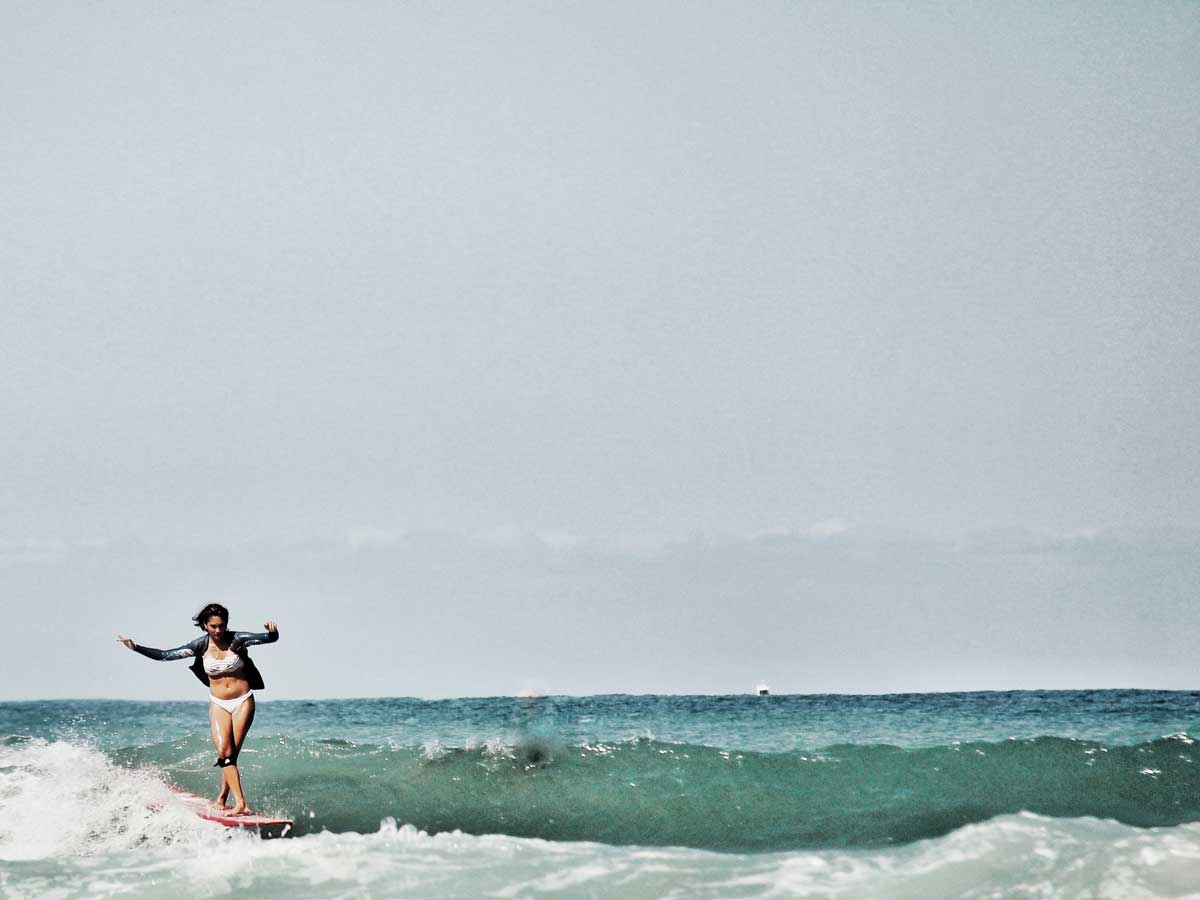 When I began surfing, I had a really messed up relationship with food and body image. I was heavily into diet culture and had signs of orthorexia.

Of course I never called it dieting. I was simply “controlling my portions,” and “abstaining from sugar.” But it took constant time and energy to source and prepare what I considered to be “healthy foods”. My life revolved around eating.

On the other hand, surfing revolves around the uncertainty of tides, winds and swells. When I started to fall in love with surfing, I instantly had a conflict.

Disordered eating is about control. It comes from a deeply held mistrust in the body’s inherent intelligence to correctly care for its host. It’s an attempt to have power over natural hunger and fullness cues. And it usually results in failure.

The number one indicator for weight gain is dieting. Dieting is an attempt to dominate hunger – but hunger is nature’s way of taking care of you. Nature always wins.

Contrary to this, surfing is about harmony with nature. If you’ve ever seen an elite surfer in perfect tandem with the energy of the wave, you know what I mean.

A surfer has to learn the ocean, learn her ways, learn her ebbs and flows, learn her movements. And then she must learn to surrender to them.

Learn the art of surrender at the School of Recovery!

An elite surfer has no idea what her next move will be. She is constantly changing how her body moves in response to what the ocean is doing. Any attempt to force a maneuver before the wave allows the opportunity for it will result in really ugly style at best, and more likely failure.

The art of surrender

I planned every meal, tracked every calorie in an app, measured every portion. But the ocean can’t be measured.

The first place I learned surrender was in a wipeout. The inky darkness held my soul as the wave had her way with me. I had to go limp while underwater. Fighting the power of it would only cause me to expend energy without bringing me closer to the surface. I had to give up. Let go. Give in.

Surfing became a “keystone habit” for me – a habit that once formed changes everything. It is like the the person who makes a habit of going to the gym early every morning. But then she has to go to bed earlier. That means she has to put away work projects earlier, which leads to a difficult conversation with her boss about her decreased productivity.

So she loses her job, goes back to school and begins a new career she loves. All because she started going to the gym. In a similar way, surfing began to change my life dramatically.

This surrender took on a whole new level when I sold everything I owned, divorced my once sober husband who was using again, and took off on a solo road trip in Mexico looking for waves. Not only were my food options much more limited, but the importance of spending time in the water and having  enough energy for the next session trumped the number of calories I was allowed for the day or the source of those calories.

The more I surfed the less I cared about what I ate. I started eating all the foods I once considered forbidden and ate until I was full. And yes, I did gain weight. A significant amount. And I would be lying if I said it didn’t bother me. I loathed myself.

Most of the weight never came off. But slowly my desires switched to craving a more balanced diet. And my rebellious appetite (which was ravenous with new found freedom) became more “normalized.”

As my surfing improved, my urge for control shifted from controlling food to controlling athletic performance.

There were some factors I could control, but I still wasn’t able to make my body do what I saw the pros do. I wanted control so badly that It was crushing me. I had several surf sessions in a row where I got out of the water saying, “I hate surfing!”

And it made me want to go on a diet. Seriously. I hated being out of control of my body so much that I wanted to find some familiar means of control.

His reply stopped me short. “Why do you place so much attachment on this, Melanie? I don’t know how else to say this, but your surfing looks like you’re trying to lift weights. You’re muscling your way through this. Relax, let go.”

I was doing it again, trying to control nature.

Hunger is a friend

But nature can’t be controlled. Hunger is a friend. Hunger is nature’s way of signaling our next move.

Wanting to look a certain way is about control. It is about achieving perfection with the one thing in life which we (think) we have 100% control over: the body.

Except, we eventually find we don’t have control – and nature will always win. Dieting and trying to control every aspect of our lives just doesn’t work.

So, I’ve come to believe that my body is good. It has its own intelligence that is far superior to that of my brain. I believe my weight has a set point, and when it’s at that point, I have the maximum energy to devote to things like surfing, writing, or being a really good friend, sister, daughter and aunty.

I’ve had to admit: I’m powerless over a lot of things. My hunger, relationships, finances, health, etc. Surfing is just a microcosm for life.

How you surf is how you do everything. And I’ve decided to surrender control to the waves. Coincidentally, I’ve recently been getting some of my best waves too.

Explore what surrender looks like in your life at the School of Recovery!