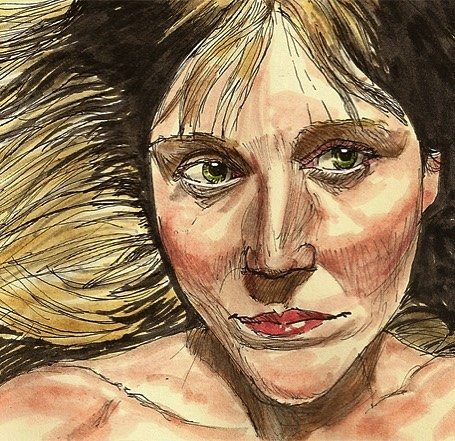 As I hit my late 30’s, I was starting to get used to this whole idea of being 40. In fact, I was looking forward to it, like I finally was earning a badge of honor. At 39, I was really ok with who I was as a wife, mom, and woman. Even if my body wasn’t perfect, I felt okay and I didn’t look bad for an almost 40-year-old. I felt that recovering from anorexia was going well like I finally had a handle on it and was living in the light that was my recovery.

Then my birthday came, and my confidence in my recovery was shot to hell, to put it mildly. I had to have a hysterectomy. At first, I was like ‘yes, no more periods’, only to have them also have to take my ovaries. This was something I was totally not prepared for and put me into early menopause. I started hormone replacement therapy so that I wouldn’t go through menopause, which added weight. To fight the weight gain, I continued to work out and started running, only to tear my meniscus, which meant no more running. Depression came in with the weight gain and I began to have a full on fight to stay in recovery. Several trips back to the OBGYN to get my hormone treatment figured out, I was told weight gain was just part of it and I needed to deal with it. Great.

So now I was forty, but instead of feeling fabulous, I felt fat and out of control. This is where I found three truths about getting older and recovering from an eating disorder.

I, for a long time, believed in this myth that at some point in my life I’d just not care about how my body looked, or that my body would just stop changing enough for me to just accept it for what it was. I felt very strongly that at some age, and I thought 40 would be it, I’d just mature out of this whole eating disorder thing and finally look at my body as a “normal” person does. I don’t know about you, but when talking to my non-eating disorder friends, I have realized over the years, that I do in fact see my body very differently. So, this thought of being “normal” and not having this monster of negative comments always looming over me, seemed like an oasis. So as I was approaching my forties, I was excited to be in this oasis, only to find my monster had also aged with me and was even craftier than I had anticipated.

My eating disorder monster was still there with more negative thoughts to fill my head. This led me to this truth; there is no magic age, or magic number of years recovering that magically make the monster stop. This truth has good and bad in it. Good that you don’t have to be all recovered and healed by a certain age. Instead, we are freed to go through this journey on our own time and at our own speed. We haven’t failed in some sense because we still battle with our eating disorder. Sometimes we sail through life; sometimes life knocks us down to our knees.

The bad is that the monster can still knock you to your knees. I don’t know about you, but I don’t like to think that I can still be knocked down my eating disorder. After so many years working on recovering, I would think that my adult brain would be able to see through the negative thoughts, but I am learning that regardless of my age, my eating disorder can come and try to steal my joy. The years of smoother sailing are wonderful, but storms can still arise, without warning and shake us to our core.

Failing is not failure

The battle for my joy has led me to the next truth, falling is not failure. We, as people recovering from eating disorders have a different way of seeing ourselves that sometimes is hard for those around us to understand. This can easily lead to feeling isolated and alone. This is where I’ve found myself circling the drain, falling into a depression and finding it hard to battle the monster in my head. The fear of failing in my recovering and the anger for ‘damn it, why at 40, am I still battling this stupid pain in the ass eating disorder?’

As a mom, wife, and part-time Youth and Family Minister (yes I swear a lot for a Minister, it’s part of my charm); I found the pressure to keep it all together intense and overwhelming most of the time. I was used to being that one that had it all together, the one who had walked through the darkness but now was the one to help others. I did not like having to raise my hand and say I needed help. I felt this would be looked on as a failure. Like I was failing recovering and worse yet, failing it at 40. Who does that? Me.

Then I got some wise words from my husband, (yes it can happen!) falling is failing, not getting up and trying again is failure. So maybe this whole falling thing wasn’t about failing, but rather needing to readjust my thinking. I know that I became a bit cocky with my recovering over the years and maybe I just needed to admit my fear, I still battle with my monster, but (and this but is important) I get back up. Yes, even as I type this I get tears in my eyes. I. Get. Back. Up. By the grace of God, I can rise again and not let this monster have the final say in my life. Maybe a battle is what I need to remind myself that I am still human and can and will fall. However, I choose, every day, to not stay down. No, falling doesn’t mean you failed. You fell, now warrior, get back up.

The final truth I have found is that I cannot do this recovering or life in general, alone. I need a support network. In my forties, I have some amazingly true friends. They have supported me throughout my recent battle. They have helped me by letting me cry when I needed to, made me laugh when I needed to but more importantly, they wouldn’t let me give up on me.

For many years my eating disorder was my friend, albeit a dysfunctional friend. It isolated me from the good people in my life and I have spent years being grateful to not feel that way anymore. Now I’m even more grateful for friends who have shown me how to be a good friend. That it is a give and take, and that I don’t have to feel bad when it is my turn to take, after all, I have given too. Friends who admit they may not understand my thinking, but are willing to listen. I have family, that when I let them in, are pretty great at being there. They have seen me through good and bad and like my friends, they support me, unconditionally.

Finding support is scary and at times, it doesn’t always go like we think it should, but it is there. And the older I get, I am finding that being picky on whom I support and who I let support me is a luxury I have gained. Not all friends and family will get it, or even try, and that’s ok. As we age, we have weeded out those who are not true or at least now can see them more clearly. So instead of thinking I have to fight this battle alone like my monster would like me to think, I have a posse.