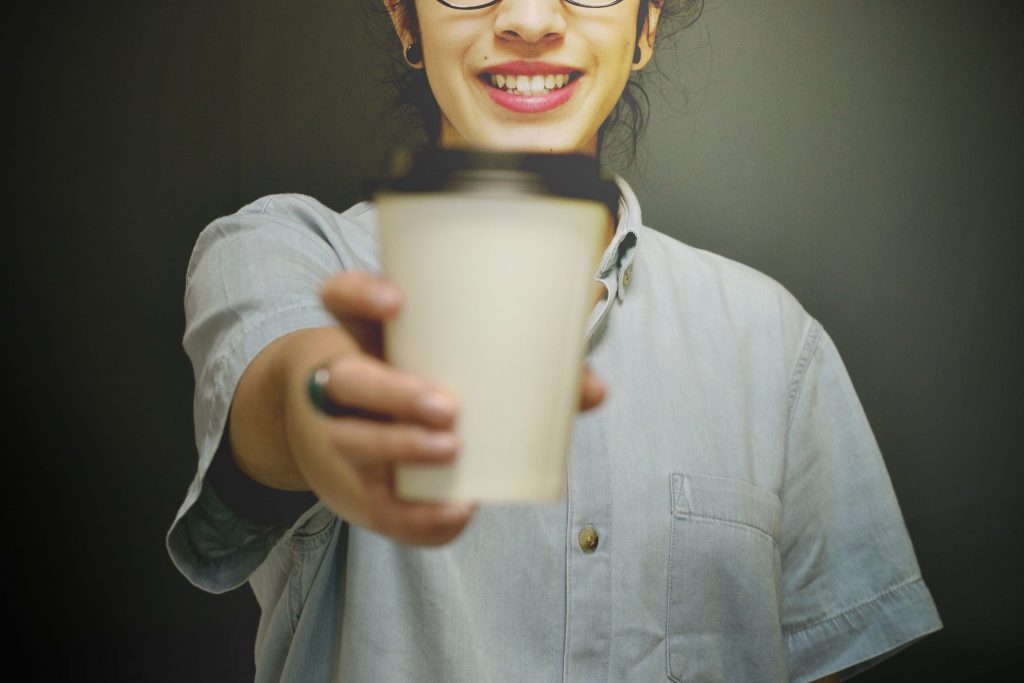 Belle sank into the warm, cracked leather of the café sofa. She dedicated a few seconds to experiencing how it felt for her legs – muscle, skin, fat – to spread in relaxation across the comfortable chair. She heard the familiar ghostly whispers of abuse – ‘these legs didn’t used to spread out like that’; ‘what have you done to deserve this decadence?’ ‘you should be up, exercising, being productive, earning your right to exist’.

She inhaled a strengthening breath and applied techniques gleaned from years of self-discovery, therapy and resources from the eating disorder recovery community. A key tactic she had learned was to recognise this as an automatic thought that she did not need to act upon. So, she gave an invisible shake of her head to the toxic monster clawing to get her back.

Thanks but no thanks, she vowed silently. I’ve chosen my path and I am committed to remaining on it. No matter how hard you try, you will never be as strong as my courage.

She lifted her cup and the smoky, hot coffee danced with her senses. The first sip of morning coffee was high up there on her list of simple pleasures. Belle had written out a list to remind her of what life was beyond her eating disorder. This had helped immensely during the torturous points in recovery when she had grasped desperately at hope and purpose. The list included rudimentary things that brought her joy and began:

Belle had existed for many years in a system rather than a ‘lifestyle’, involving intricate control, self-disgust, punishment, reward and shame. Her gradual, laborious movement into recovery had seen her repeatedly fall down, step back, jump away, run in circles, and crawl back onto the path. This was largely because she was unable to comprehend what she would do with herself, what her meaning for living would be, if she no longer had the exhilaration of ‘reward’ for her anorexic efforts at the end of each gruelling day.

The manifestation of anorexia in Belle meant she restricted and over-exercised all day to ‘earn’ an evening binge, comforted by the deviously enticing arms of ‘Ed’, the personification she used to visualise the disorder. Such imagery helped immensely as it allowed her to see that she, Belle, was not having these thoughts and making these decisions because there was ‘something wrong with her’; instead she was being unfairly hijacked by this fiend who spoke to her unconscious mind, forcing her into certain behaviours and choices.

The list of little pleasures helped remind her of the world that lay out there, waiting for her to join in, when she felt good and ready to abandon the anorexic system entirely.

Belle preferred the term ‘wellbeing’ as something to strive for and believed an optimal level of this could be entirely different for two people sat next to each other on that bus. And that this was OK.

On this January afternoon Belle adopted her favourite position in her local café – dreaming out of the window. A bus passed by, emblazoned with an advertisement for a gym, complete with an aggressive and shaming message regarding new year resolutions. She glared at the back of the vehicle as it sailed through town, misinforming everyone that they are not good enough and lying that the answer to everything is to ‘get fit’. Belle had learned, through agonising first-hand experience, that ‘fit’ and ‘healthy’ meant something entirely different to what was portrayed by the diet and fitness industry. These days Belle preferred the term ‘wellbeing’ as something to strive for and believed an optimal level of this could be entirely different for two people sat next to each other on that bus. And that this was OK.

Everyone is different and has the right to conduct their short existence in this world according to their own set of values, she thought defiantly. The relentless psychological bombardment about how one needs a perfect body and nutritional composition is a cruel, lethal method used simply to make some people a lot of money.

This time of year was proving to necessitate an increase in Belle’s strength and stamina to maintain a stance against guilt and in favour of self-compassion. Clothes stores were advertising exercise gear, supermarkets were brandishing offers on ‘healthy living’ food and television was showing programmes with such brazen titles as ‘How to Lose Weight Well’. It felt like the world conspired against her recovery efforts.

Belle had recently developed a new strategy to cope with this pressure. She had made a pledge to ‘choose recovery’ on every possible opportunity. This did not mean she suddenly acted like the model recoverer at every minute of every day. It meant that whenever she caught herself and recognised an occasion for decision, she made one that pointed in the right direction. This could be something as small as diverting her usual journey and instead taking the shorter walk home – even if she had time to kill and felt perfectly energised – because this was the decision that was going to help conquer her compulsions and aid weight restoration. Or it could be something she considered huge, such as purchasing novel food from a bakers or butchers, who did not stamp nutritional information all over their packaging.

Most importantly, if she stumbled and did not manage to follow through with positive actions, she did not shame herself. She applauded her progress and made a positive decision at the next available opportunity. For example, she may leave the daunting new foodstuffs in the fridge and cook something more familiar that evening – but would herald her bravery for buying it and maybe even manage a different, smaller step such as an extra treat for dessert.

Belle opened her journal, suddenly inspired to make a few notes on her latest recovery musings. She found the act of recording thoughts and feelings invaluable. This was not because she intended to spend a lot of the future looking back over her writing, mind-maps, photographs and doodles. It was because putting pen to paper, viewfinder to eye, or fingers to keyboard helped disentangle her burning thoughts and emotions and shone light on the path she needed to keep walking along.

Belle wrote ‘nothing is beyond salvage’ in her journal. This would serve to remind her of that morning in the supermarket. It was always a challenging chore for her, given the sheer number of decisions involved in a shopping trip, and she had found herself struggling. In one particular aisle she paused for a moment and visualised herself in the same location a couple of years ago. She remembered the intensity and nature of the inner battles going on back then, and the sheer length of time it used to take her to fill a small basket, make it to the checkout, and leave the store.

Looking back, she saw a near-helpless woman in the deathly grips of an illness, making every decision based upon anorexia’s coarse internal screams. The woman felt beyond saving – she didn’t understand how she would ever be able to win the fight so had may as well surrender and live by the rules of her disorder.

However, in the present day in that same aisle, Belle felt a surge of pride that this woman had somehow managed to start making microscopic decisions that had softly given her just enough power to begin shuffling down the recovery path. The woman had not been beyond salvage; and although during the past few years she might have reverted to the ‘safe’ option of anorexic decisions for days or weeks or months at a time, every situation could be salvaged. There was still another chance, at the next possible opportunity, to do something positive and hobble in the right direction.

“Can I get you another one?” Belle blinked at the kind face of the barrister.

Should she sit here, warm and content, for another round of coffee? Or should she wander out into the chilly, dank air? Her schedule for that day did not require her to be anywhere for a while.

Belle faltered under the pressure of having to decide immediately and respond to the barrister. In these situations, when she felt she lacked her own voice, her approach was to revert to personifications of illness and recovery.

Recovery (a stoic, patient friend with nothing but her best interests at heart): “Stay, relax, live”.

Belle’s go-to inspirational quotes played in her head. Treat your body as though it belongs to someone you love. Feed the person you want to be.

“Another would be lovely, thanks.” Belle smiled to disguise her surging apprehension. Choosing recovery was not easy as it required a superhuman stance against the commanding, severe compulsions of anorexia.

If all else fails, fake it ‘til you make it, she thought ruefully.

Choosing to act like a recovered person, even when enveloped by the flames of anxiety, still constituted another footstep down the path she so desperately wanted to follow.