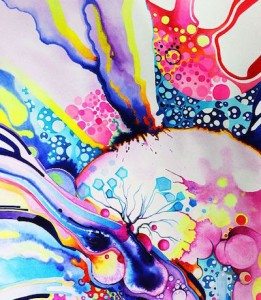 During recovery, it can be very difficult to believe that things can ever be different. We acknowledge that physically we can eat a suitable amount of food and reach a healthy weight, but it’s difficult to believe that the relationship with food and weight can ever be the same. Our thought patterns are so ingrained and appear so overwhelmingly pervasive that they feel just part of who we are, and that’s just that.

What if this is the way your brain is? Well, it may be that way at the moment, but it doesn’t mean it can’t change.

The brain alters as a result of an eating disorder, with muscle atrophy causing the brain to literally diminish in size, reducing the grey and white matter in the cortex, as well as the altered neural patterns which emerge via the disordered behavior. The good news is that this can be reversed. The brain is a quick learner.

The concept of neuroplasticity challenges the once-held theory that the brain is a static organ and refers to the brain’s malleability and ability to alter in response to stimulus and experiences. Different behaviors, fresh learnings, environmental changes, and physical injuries may all cause the brain to grow different new pathways or reorganize existing ones. These changes can fundamentally alter how information is processed, and so both the brain’s physical structure (anatomy) and functional organization (physiology) can change. (One of the most famous studies to show how the brain reorganizes and modifies as a result of intellectual and practical provocation is that of the London Cab Drivers).

New neural pathways are formed when we do something different. The synapses in the brain are forced to make new connections. The more often this happens, the more solid this connection becomes. It’s like walking through an overgrown field. The path through the field that is taken more frequently is the one where the grass is flattened and the end point clear. The first time a new route is taken it is more difficult, and the legs have to work harder, but the foundations are made. The grass is slightly squashed, ready for the next attempt. Over time, a new path is formed, and this new path becomes the default.

The first time we do something, it seems weird. And that makes perfect sense because literally, our brains aren’t wired in that way. At that moment. But repeated action can and will alter the make up of the brain to make it be wired in that new way, and as a result actions will no longer seem strange or uncomfortable, but become the norm and default. Our behaviors depend on how our brain is structured, but the brain constantly shifts and reorganises itself as a result of our behaviors. By changing behaviors and thought patterns we are changing the structure of our brain, and as a result of this, the thoughts and behaviors become more automatic and comfortable.

The brain is a remarkable organ. Instead of blaming it for your eating disorder, consider how it can be used as a tool to fight it.

Podcast Episode 034: 4 Steps to Change Your Brain and Behaviors With Travis Stewart